October's Child: The Opulence of the Opal Birthstone 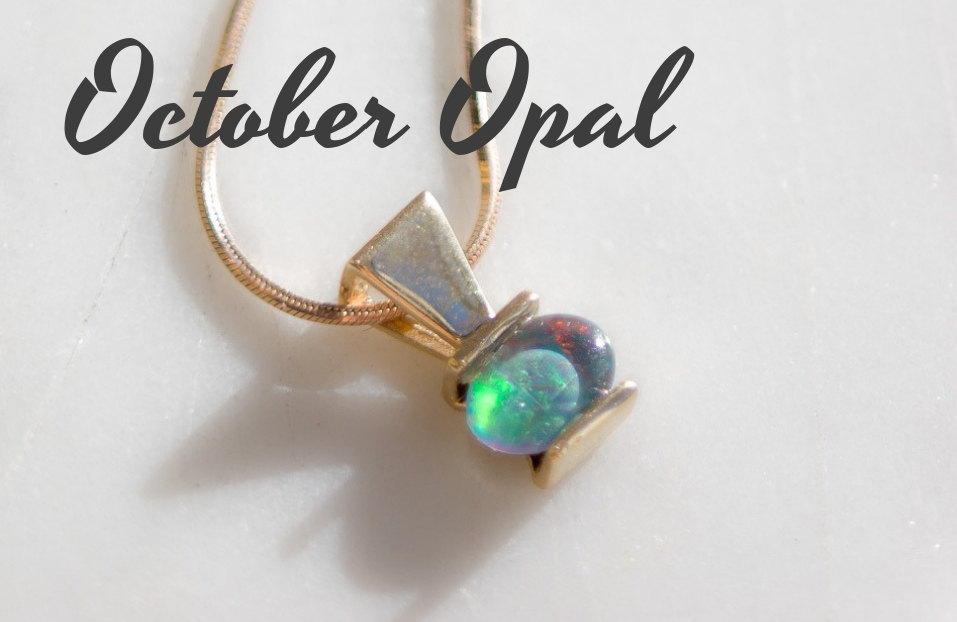 At Aurum we say the only bad luck about an Opal is not to own one.

They are one of the most beautiful and truly unique gems.

How do Opals aquire their other-worldly luminance and acquire beauty? And why on earth would they be associated with bad luck?  Read on to find out! 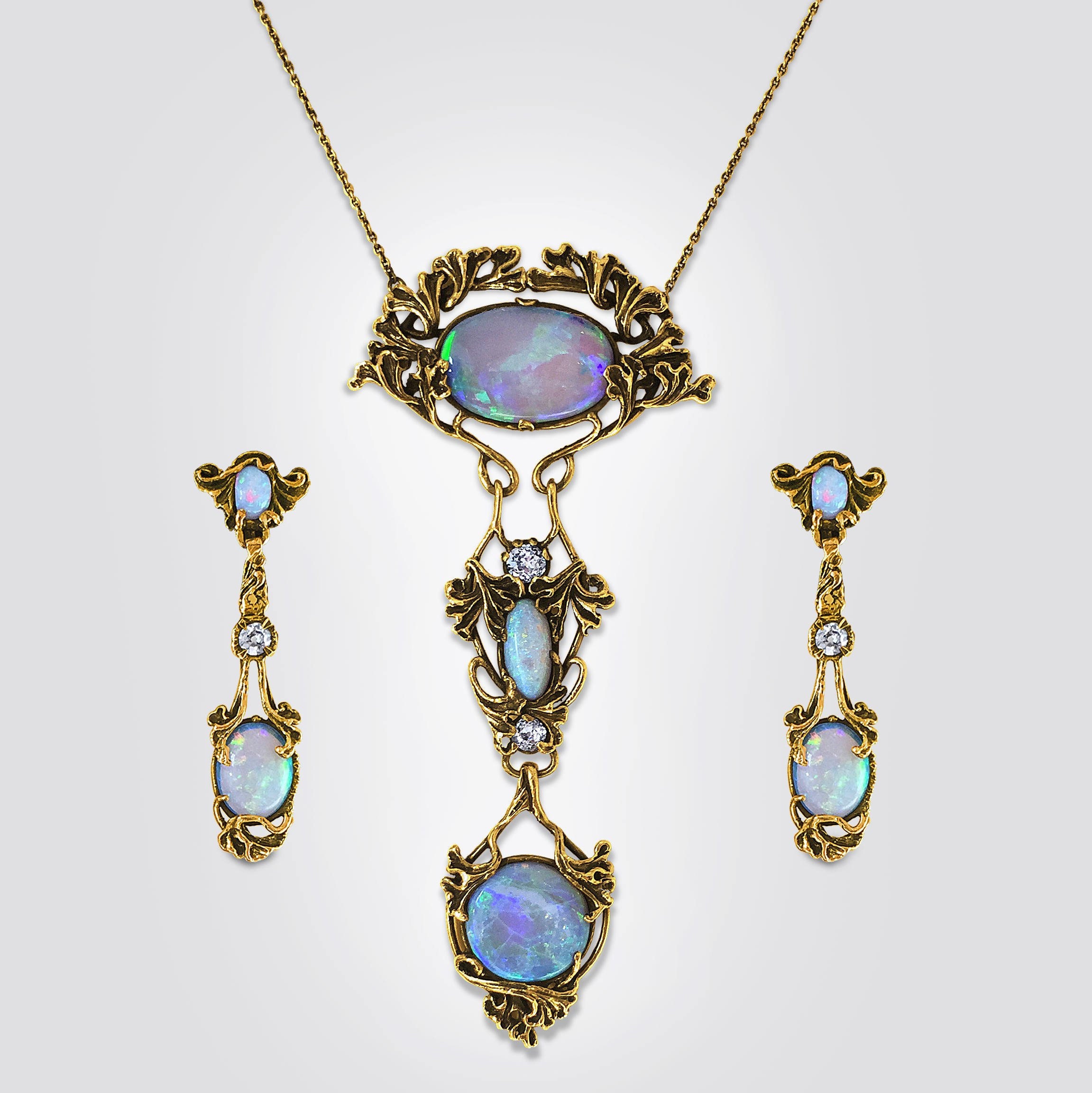 The superstition was merely a fad

If you've ever been told that an Opal brings back luck, you may have wondered how that is possible. With their incredible and varied luminance and hues, they certainly are once of a kind, and one would think that would make them especially treasured.

The swell of superstition about Opals surfaced only in the 1850s with the popularization of the book Anne of Geierstein by Sir Walter Scott, wherein the heroine wore an Opal in her hair. In the novel she is sprinkled with holy water, a drop of which falls onto her Opal jewelry and all it's color vanishes whereby she falls into a swoon. The next morning she is found a heap of ashes. A mournful tale indeed but a fiction.

In fact, long before the popularity of Scott's book, Opals were considered quite lucky! In the middle ages it was thought that due to the plethora of colors visible in an Opal, it held the charms and virtues of each of the gemstones! As s a business full of 'October's children', (including our owner and jewelry designer Paul Michaels) we like this superstition best of all!

Creation and Composition of the Opal Rainbow

One must be careful with Opals because they are a silicate, which renders them sensitive to drastic changes of temperature and impact from collision. A silicate is a compound, which is comprised of alternating chambers of oxygen and water. When light goes through the silicate, very much like a rainbow, the light is refracted into several different colors, creating the iridescent rainbow effect.

Opals are actually found through the use of divining rods! When the opal seeker walks across a sandstone earthbed, the divining rods will swing open, indicating there is a fault or fissure in the earth below. From there the Opal miners will drill, till and sift the sandstone at the fissure to sort out the bits of raw opal gem.

Options and Variations in Opal Jewelry

Opals come in several variations, but primarily there are Black Opals (not actually black) and White Opals (not actually white). They originate mostly from Lightining Ridge in Australia, however recently have been mined in other countries such as Ethiopa, the state of Nevada, and Mexico. Opals found in antique jewelry might have come from Hungary, which once had a spectacular reputation for its finds. However those mines were completely mined out, and have not produced stones in over a hundred years now.

In the image below you can see the tonal differences between a “black “ opal, and a “white” opal. The black opal has a darker body color, a deeper richer background tone, almost bordering on black, and are the most rare. 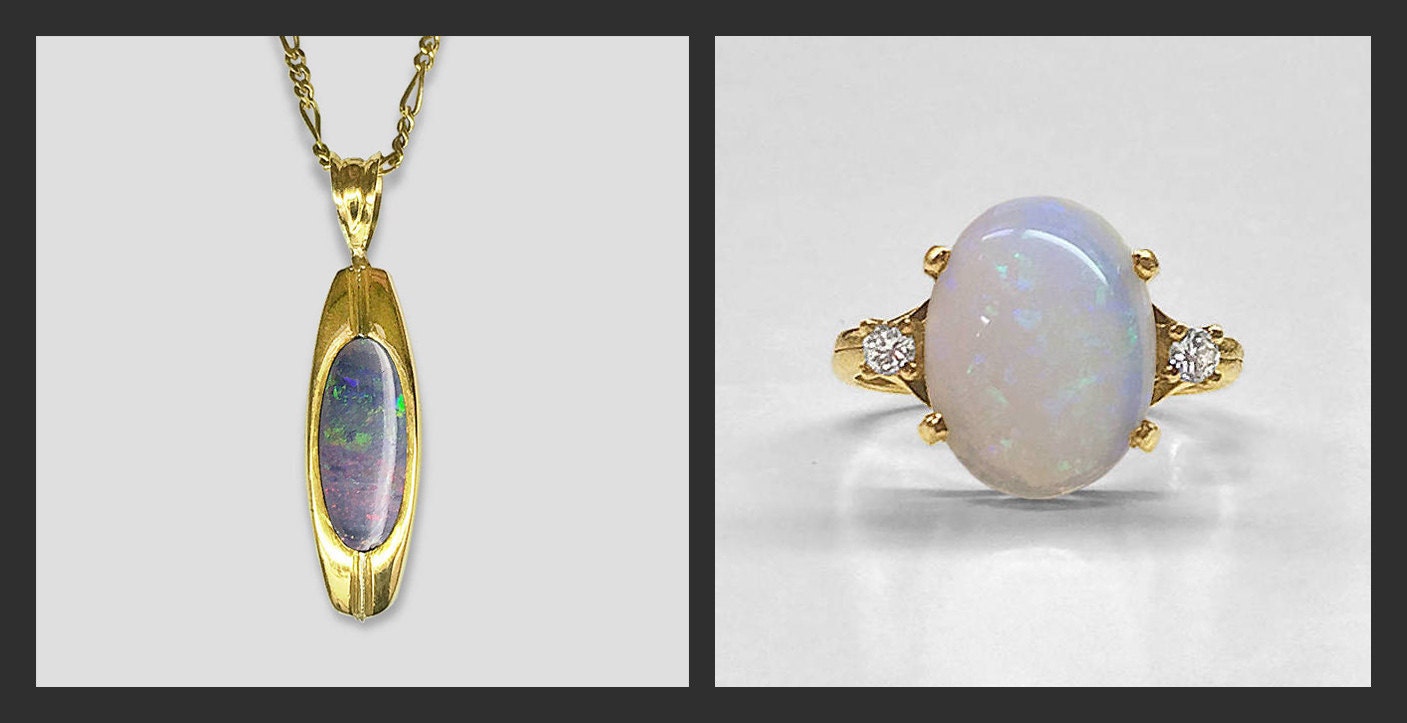 While there are whole opal gemstones, for a more affordable option, you might consider an Opal Doublet or Opal Triplett. We have in stock some Black Opal Doublets, which are inlaid into onyx. An Opal Triplett contains a layer of black Onyx, a layer of Onyx, and is topped off with a clear coat of rock crystal to protect the stone. These are not only a beautiful and inexpensive Opal option, but are quite durable!

To see these pieces and more of our precious Opal jewelry visit our collection here. 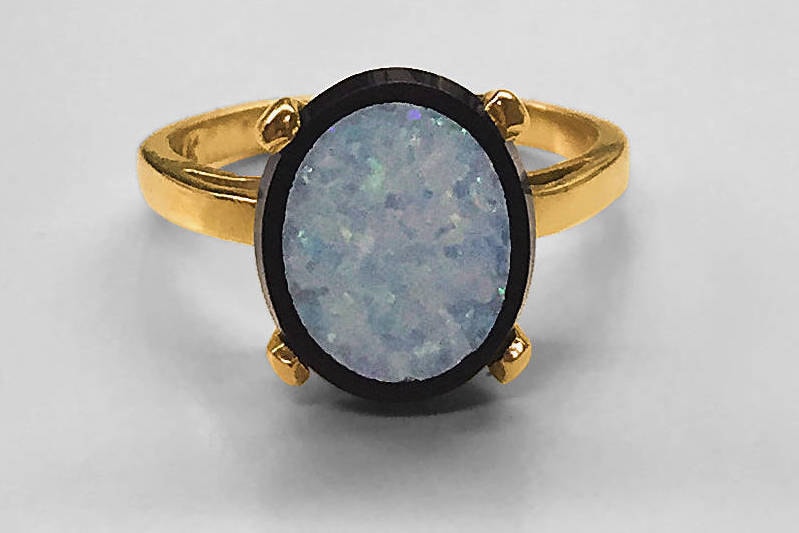 Please comment below, we will be happy to answer your Opal questions.